Air cargo is a complex business involving a massive supply chain that stretches all across the globe. The ecosystem is divided in a very granular manner, with the airline itself handling a very small portion of the cargo movement and the rest being handled by partners which are far from seamless in their connection to the chain. Between the shipper and the receiver, every package passes through several hands with varying degrees of manual and automated operation.

In the absence of full digitization, the excessive number of non-standardized intermediaries in the network form weak links on the chain. The solution is undoubtedly a full digital recast of the business, but that too comes with its own set of challenges if there is a lack of clarity or disagreement in objectives: 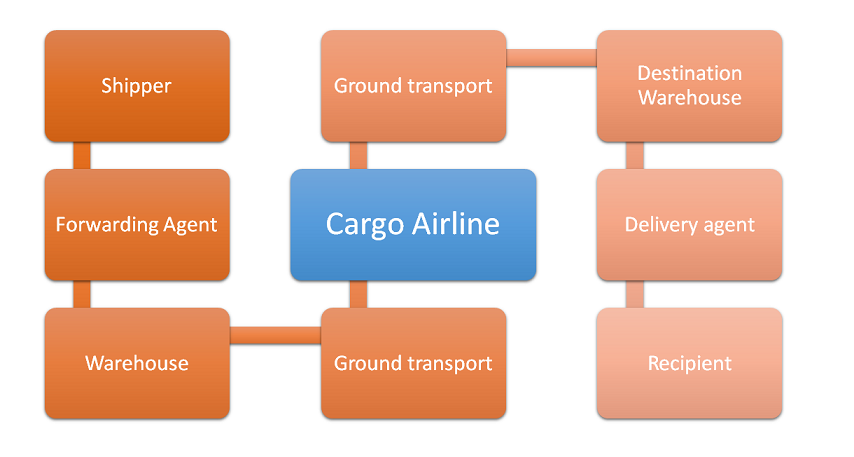 While there is widespread consensus on the need for digitization and effective data sharing mechanisms (a data backbone for the industry), there are multiple concerns around ownership of such platforms and the neutrality required in implementing the operation effectively. All the missing pieces point towards blockchain as a viable solution.

The case for blockchains

Blockchains, by their very nature, offer transparency, data security and decentralized operation – all of which put together will enable us to solve many of the problems that the cargo industry has been grappling with for a long time. There is a lot of skepticism around the concept, with some people even calling it a “solution looking for a problem” – one which airline cargo may provide! A recent Stanford University study estimates that a good 86% of R&D initiatives around blockchain are solving genuine problems, and 55% of these are expected to make an impact within a year. Around 14%, however, belonged in the “hype” category according to the study.

As part of our rigorous investment in R&D (into which we channel back a good percentage of our company revenue), we have experimented significantly with the operational aspects of air cargo on a blockchain platform and got some very useful insights. Fortunately, we are at a phase of technology evolution where cargo business leaders need not worry a lot about feasibility anymore – at least, boundaries are rather wide in that sense. They should instead focus on the specific results they seek from blockchain in their business.

I don’t want to get into a full description of a blockchain or how it works – you can read it in this blog post How to explain blockchains to a 10 year old if you need an update. But the key feature we harness in airline cargo systems will be the immutability of a blockchain, as well as the decentralized ledger concept. This will help us build supply chains that are capable of handling shipments which are fully traceable from its origins at a component level, ensuring full integrity at all phases of movement. Some examples:

Read more: A reality check on the digitization of air cargo

To an astute airline company, this gives the opportunity for a distinct array of cargo products, in alignment with the high value-to-volume ratio which is characteristic of the industry. It is also possible to implement staggered payment models (payment for each component as it passes through the value chain), using smart contracts implemented through blockchains. Entrepreneurs and technologists sometimes joke that the biggest problem solved by blockchain is “funding” – a reference to the legend that including the word “blockchain” in product descriptions makes it easier to secure VC investments. Whether that’s true or not, there is absolutely no doubt that the airline cargo industry has a lot to gain from deploying blockchain in the right places. Plugging revenue leakages and isolating supply chain failures stand out for the airline, but there is a bigger picture – of superior cargo products, facilitating not just unprecedented efficiency but also better compliance with the global rules of trade. Regulatory bodies will be able to implement policy changes, clearance information and tariff regulations in an instantaneous manner, tracking violations and leakages more effectively than ever before.